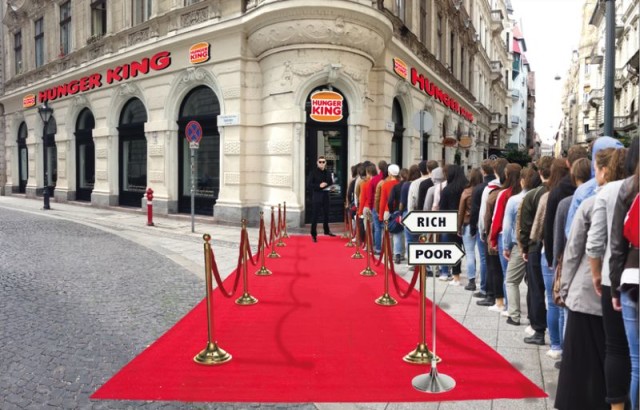 “If a company opens a new shop in town, customers are naturally allowed to overnight and queue on the street to get the new product”, artist Jani Leinonen explains.

After the change of the Hungarian constitution article XXII in 2013, the homeless are punished for using “public space as a habitual dwelling.”

Leinonen continues: “By setting out the Hunger King and giving out our products, we enable homeless people to camp there without being taken away or punished. Looks like capitalism has more generous rules than humanism has.”

The burger boxes contain exactly the sum of Hungarian state’s minimum wage. To make the statement clear, Hunger King is located in the heart of the Hungarian commercial centre, close to Louis Vuitton store and the State Opera House. For its wealthy customers Hunger King offers a red carpet fast lane and art pieces for sale.

For those who can’t visit to Hunger King, the restaurant has launched a website www.hungerking.net. On the website people may send mass statements to Hungarian Government’s public Twitter accounts. Contribute and follow the project by using #hungerking.

The performance demonstrates against the political leaders that are responsible for the antihomeless regulation. Hungary has one of the grimmest interpretations of the free market economy in the European Union. The system does not only discriminate the poor but the new legislation makes it also possible to penalize them. Limitations have been set for NGOs to give humanitarian help (warm meal give-out forbidden) and there have been violations of the free press and speech reporting on the matter. University Professor that wants to stay anonymous analyses the situation “the constitution has a role of highest social interest in every country. By changing the article on 2012, Hungarian government has created stronger legal basis on punishing the homeless. It is the fact, like it or not.”

When Jani Leinonen was invited to Budapest to create an art project he decided to channel most of his project budget to homeless people. He also got a donation from a Finnish media and activism project Docventures.

“The Government’s campaign to demonize the unemployed and the homeless draws the attention away from their dramatic political failures”, Leinonen explains. He adds that it’s not just Hungary. “Hungarian situation depicts a global problem. The political and the economical elite has screwed things up, and now they are using every trick in the book to ensure their power.” Leinonen doesn’t want the queue to end up being another publicity stunt. “The ruling system here, like almost everywhere, is doing its best to paralyze our capacity to think about alternatives. It is my job as an artist and a duty as a common person to encourage people to imagine alternative social and political arrangements”, Leinonen says. Therefore, Hunger King is meant to be also an activism centre empowering the people. “Social media has a great power. Through the Hunger King’s website everybody around the world can send their greetings to the elite of Hungary that seems to hate the poor.”