Burglar used a lawn mower to carry his loot in Finland 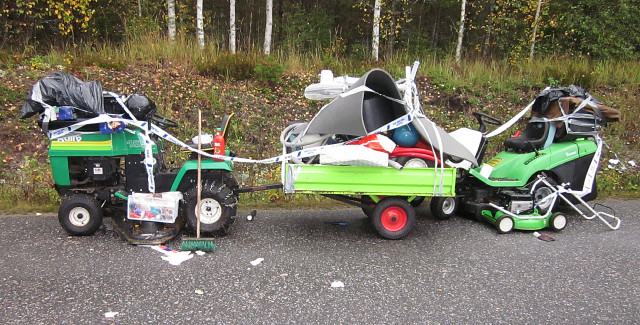 A burglar used a lawn mower to carry his loot during the night between September 22 and 23 in Kesälahti, Finland.

First, the man broke into a summer residence in Tarnala village and took some personal property with him. He packed his loot to a ride-on mower, which he found from the scene, and drove with it about 10 kilometers to Rajavaara where lawn mower’s fuel came to an end.

This is when the man broke into another summer residence and seized a wide variety of movable property, including blueberries from the freezer. In addition, the man took a garden tractor and a trailer in his use, where he once again packed up his loot.

The thief continued his journey with the combination of questionable vehicles, including the lawn mower he had stolen earlier. Eventually he got tired of driving in the dark night and fell asleep on the combination to the roadside.

Passers-by informed the police about the man and a police patrol, which arrived at the scene, took the still sleeping thief into the custody. He admitted his act in the interrogation. Stolen property was almost fully recovered, except the blueberries he had eaten.

(Source: The police – in Finnish)