How to win the Internet – aka. the winning lines of internet arguments 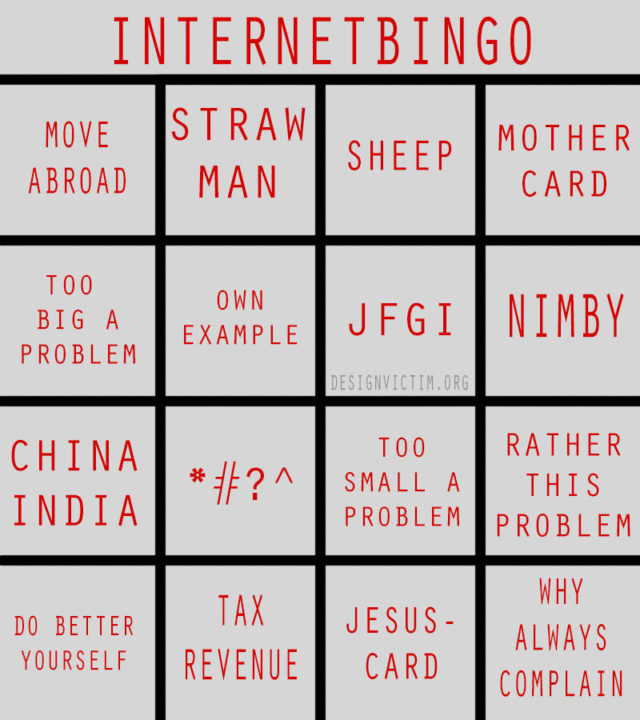 Isn’t it annoying when you’re right and the others online do not see it? Use these phrases, and you’ll win the internet for good! Or, if you are just a bystander, play the internet bingo when you see these arguments in use.

1. Start soft / explain first
“Don’t get me wrong…” “No offence, but…” Show the people you’d WANT to share their opinion. After the BUT you can say anything you want. “I’m sorry, but in your instagram selfie you look like a dead cow.” Let the compassion shine through!

2. Why don’t you do it yourself
Was the motorway dangerously slippery? Festivals had terrible toilet facilities? Nuclear plant has continuous problems with design? Well, mr. Smartass, why don’t you build your own motorway / festival / nuclear plant when you know so much already??

3. Call your opponent a whiner, nimby, or suggest they have sand in their privates.
Why people complain about everything? Point out that the opponent is an unreasonable whiner, and everyone else will see you’re above the whining and complaining.

The sand in one’s vagina is a very fashionable insult. Use it, and everyone else will think you’re up date on lingo and good with words and language. Cool. Hip. “Or maybe you have sand in your vagina.” There. The Voice of Reason has spoken, without any boring reasoning. See also: Vulgar talk.

4. You can always move to the countryside / abroad
Way to hit a Nimby! Of course nobody has to tolerate everything, and only reasonable solution to this is to move out of town. Applies also if there is disagreement on politics. “Why don’t you move abroad if it is so much better there?”

5. There are bigger problems in the world.
Indeed. Why do you complain about un-kept trash bins at the park next door, when there is a plastic swirl size of a continent in the Pacific Ocean? As an ultimate example, all the problems in the world are un-relevant on a universal point of view, seen from the space.

6. This problem is too big for us to worry.
Climate change, nah, no point to worry about that – you cannot do a shit alone. Let’s focus on smaller problems, like un-kept trash bins at the park next door.

7. Why focus on problem X, when Y is way more acute?
If you cannot derail your opponent by pointing out way bigger, or smaller problems, point another one of same scale and call it more acute! Instead of crowded city hospitals, people should worry about badly funded daycare! Why you worry about animal shelters and their lack of volunteer staff, when there are public restrooms that need cleaning too? This excuse works actually best, if you yourself have never done a thing on behalf of anything. Order the diligent ones do the chores YOU think should be done, not the ones they would like to do! (Or, even if you do not care about anything, this is still a good way to shut up conversation about things you do not like – people do not know you do not care a shit about daycare either, but you got bad service at the hospital last time and they totally do not deserve any help from anyone.)

8. Things are way worse in China.
Human rights, animal rights, pollution, clean water… end these vain conversations immediately by pointing out how much worse things are in China. Even better: mention BOTH China AND India. There, no point in discussing the local issues anymore! (Always remember to mention the populations of these countries also to strengthen your point. It doesn’t matter if you remember it wrong by few billions.)

9. Someone is making money out of this / it builds up tax revenue.
You should be happy someone is doing something for the sake of this country. Workplaces and tax revenue are the most important things in the world, and everything should be compared to this. Just think about how much jobs alcohol and drugs generate: police, head trauma surgeons, cancer clinics… Even child welfare creates jobs, imagine how much less tax revenue would come if all the welfare people and child psychologists were unemployed!

10. One personal example brings down any amount of proven science.
Oh, your grandpa smoked two packs of cigarettes a day and lived to be 85? Remember to tell this story everywhere. You have a clear example how decades of science are doing it wrong. Also, climate is so not changing because you had to do snow shoveling yesterday.

11. “Sheeps”
People who follow laws and regulations are sheep. Point it out immediately. True man takes down a shadowing tree in the community park without permit, lands it on his neighbour’s car, and argues with the insurance company for the rest of his life. Permits and laws are for losers.

12. Jesus-card
Faith strong enough is not shaken by any amount of science or empiric evidence. Bible always gives an answer to back up your story. In a tight place, just refer to Old Testament, nobody probably will go check your quotes anyway.

13. Nazi-card
Call your opponent a nazi. This goes well with any conversation, ranging from walking on a just-set park lawn to immigrant rights.

14. Mother-card
Mothers know it best. No matter what the subject, if you have a child, you know more than the silly singles. If conversation gets too technical, you can always say your husband knows this area thoroughly and you are right again.

15. Vulgar language
Conversation about dog parks ends shortly, when you point out the others probably like poop-related activities at home as well. Ponder out loud does the opponent like rough sex. Vulgar comments about profile pictures or twisted nicknames usually shut people up. You can also just be plain racist.

16. Build a Straw Man and hit it. Hit it hard.
Conversation gets more colourfull, when you let your imagination flow freely without any hesitation! “You say Fire Department is under-funded? No way, all they do is rescue cats down the trees all day long! But what, if a boat full of children would sink at the same time when all the firemen were up in a tree – all of the kids would die! You’re such a CHILD HATER for putting those flea bags ahead of the poor drowning children!”
Accuse your opponent of things they have never done (but COULD be doing right now.) Turn the conversation as far away as possible from where it started.

17. Tell opponent how they should act, to truly correlate with the stereotype.
Judge the opponents by your own imaginative standards, stereotypes and criteria (that you yourself would never follow, but opponents should, so he would sit better with your prejudices). Then you can point out how wrong the opponents is living his life. “As a liberal and tolerant person, you should not judge people if they want to be openly racist.” “Carrots have feelings too, how can you eat them?” “You use the bus, didn’t you just say you are against cars in the city centers?”
You can also try to walk a mile in your opponent’s imaginary shoes, and point out things he should do instead of arguing with you. “Should you not be killing the hedgehogs, if you are so much against invasive species, hedgehogs have very sharp spikes that could kill a child if swallowed?”

18. Silly people doing things for other people
Point out how you are far more brilliant than people, who volunteer to help the others. Only silly people want to help the others, because they could do things that help themselves instead. That’s why they are probably poor, too. True story from a local newspaper: The news was about WWF training volunteers to clean the beaches in case of oil disaster at the Baltic Ocean. Conversation ended with this wisdom from someone’s home couch: “Nonsense. If you go and volunteer at the oil disaster, there is no reason to go and complain about head ache afterwards at the hospital, if you have gone to the oil beach purposedly.” What’s there more to add. Better to leave the oil at the shoreline.

19. Just Fucking Google It.
When you run out of arguments, tell the opponent to go google more info. They would find the truth and join your side, if they just would google enough. Because you pretty surely read a good article (that you cannot sadly remember anymore from where), but it was about this same topic. Others should read it too. Then they would agree.

20: Lastly; leave all arguments and laws behind, and threaten your opponents quiet.
Is someone gathering clothes for refugee children? Women taking part in discussion about computer games? Someone criticizing your employee? Threaten to rape their children and kill their spouses. Everyone sees how you know the truth, you have the superior opinions of this matter, and the future will be better if everyone just would agree with you! Better world for everyone, violence and rape threads are the only means to this outcome.

Did we get em all? If you have good points to end a conversation, do not be afraid to list them down in the comments!