Is the Family Guy episode related to the Boston Marathon bombing? 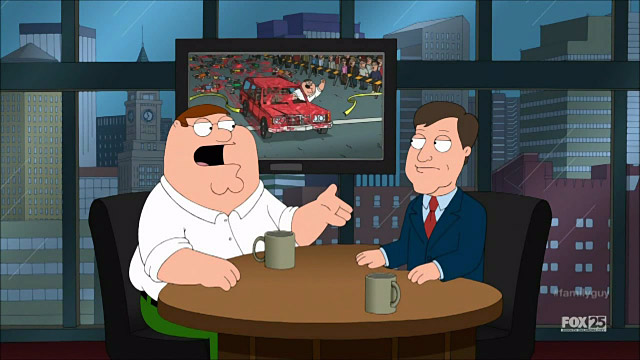 Has it already been a busy week for the USA law enforcement because of the Boston bombing on Monday, April 15, 2013, and then there are independent news media accusing them of the inside job. But if that wasn’t enough now also Glenn Beck joins the conspiracy orgy by no less than asking the law enforcement to tell to the public what the heck is really going on with a Saudi national connected to the Boston Marathon bombing. Glenn also set a timer till Monday or he will release whatever they have found out. However, I won’t pay close attention to either Info Wars or Glenn Beck who both keep blaming each other.

But what I will give more of my attention is the Family Guy episode “Turban Cowboy” that was aired on 17 March, four weeks prior to the bombings. The Hollywood Reporter posted five days ago on their website that the video clip allegedly taken from the same episode and now circulating on the web is a hoax. Fox has removed the episode from Fox.com and Hulu.com. Also the creator of the show, Seth MacFarlane, tweeted that the clip is abhorrent:

The edited Family Guy clip currently circulating is abhorrent. The event was a crime and a tragedy, and my thoughts are with the victims.

The episode starts when three grown-up men thinks about doing something different and fun from their daily routines so they go skydiving. On the way down Peter thinks skydiving is awsome and he remembers the last time he felt a rush like that and it was when he won the Boston Marathon. The story then shows the past when Peter drives a car over the runners leaving blood on the street. Peter driving over the Boston Marathon runners on the episode of Family Guy.

Next, Peter is shown in an TV interview and being asked how did he do it (win). Peter explains: “I tell you Bob. I just got in my car and drove it. And when there was a guy on my way, I killed it.”

Peter keep on skydiving and while once again he is falling down he recites a poem:

Just as gorgeous as ever. Actually puts me in the mind to write a spoken word poem:
Am I falling,
or am I flying?
Am I living
or am I dying?
Oh Great Spirit, free me from the bonds of gravity and criticism.
Deliver me from my greatest enemy.
His name is Peter. More specifically, Peter’s shyness in public.
Oh Great Spirit, why do I hold myself back in such situa… [Impales his ass on a flagpole] OH! [peeps over the cursing]. Oh! Damnit! The Eiffel tower? Oh, Cool!, I’m in Paris! —Oh crap, I’m in Vegas.”

Peter then gets friends with a muslim man in the hospital. His other friends think Peter’s new friend is weird. Brian, the pet dog, thinks the other friends don’t like him because “he’s a muslim”. Brian says:

Later Peter calls his new muslim friend on the cellphone he gave Peter. When he dials the number, something is heard exploding on the background. Peter dials the number again and another explosion is followed. The rest of the episode is pretty much the usual racial stuff how terrorism has modified people’s thoughts of other cultures and how it’s wrong. The racism topic they go through in the episode is like a reminder.