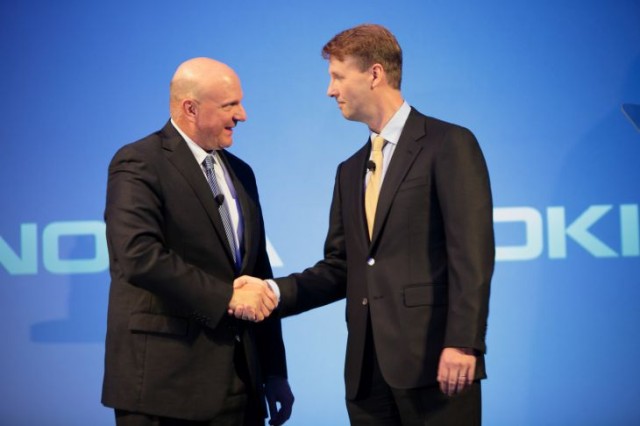 Microsoft buys Nokia’s mobile phone business. The transaction price is 5.44 billion euros. Nokia will license its patents to Microsoft and Microsoft will use Nokia’s mapping services, the two companies announced today. Nokia CEO Stephen Elop will return to Microsoft. Nokia will concentrate on infrastructure, mapping and licensing. Along with the emotions big questions were risen from the deal.

Was the price too cheap?

“5.44 billion is a ridiculously low price of the former world’s largest mobile phone manufacturer”, wrote (text in Finnish) YLE’s financial journalist Pekka Pantsu and he’s not the only one. For example Alekstra analyst Tero Kuittinen told Yle he was surprised of “notably low price” that was less than Microsoft paid for Skype in 2011.

Kuittinen also told that the timing is quite a shock as Nokia had seen robust growth in sales of some models over the summer. The conventional wisdom among analysts was that Nokia would wait at least a year and see how newer, high-end Lumia models, sell before making any such drastic decisions.

Tens of thousands of Nokia employees will transfer to Microsoft

An estimated 32,000 workers will transfer to Microsoft from Nokia, with 4,700 of them located in Finland. Nokia headquarters will still remain in Finland. Microsoft CEO Steve Ballmer told on Tuesday’s news conference they have no plans to move the work elsewhere.

How is Microsoft going to reassure Nokia employees such a way that they actually want to move to work for Microsoft? They are people with own will and therefore they will decide themselves where they’ll work in the future.

The future of Nokia

The deal will strengthen Nokia’s financial position very significantly and will affect its income generation. But a big question is how Nokia is going to use all that. Does Nokia actually have any great new ideas where to put the money?

After the arrangements Nokia plans to concentrate on three activities: NSN, map and information services, and technology development. Also according to Timo Ihamuotila, who will become temporary CEO in Nokia, the company will continue working with network business and location services. “You can be sure that we are dedicated to further innovation and our license program will continue.” Ihamuotila said in the press conference.

Historian and connoisseur of Nokia professor Martti Häikiö commented on Nokia’s sales on Yle TV (interview in Finnish) that he wonders why there is such a funeral atmosphere in Finland. Selling the unprofitable part of the company shouldn’t be sad to Finns. Nokia will invest on the future technologies and location services. Häikiö said Nokia is one of the world’s leading company in the networking business and that part of the company is very profitable. “We are now moving to fourth generation [of telecommunication] so called LTE technologies where there is enormous need for investment all over the world which requires a huge research effort and nokia is now clearly determined investing in this knowledge.”, Häikiö told.

According to the press release Nokia holds a patent portfolio in the future, and it will continue to be a brand owner. When arrangements are exercised Nokia can not use its brand on any mobile stations before the end of 2015, sheet sets. This detail in the Nokia’s press release drew Häikiö’s attention. “Nokia sold Lumia brand, it sold Asha brand, kept the Nokia brand itself but there was said between the lines that this disqualification of mobile phones extends to the end of 2015. I immediately thought that are there coming new Nokia mobile phones in 2016.”, Häikiö pondered.

It will be interesting to see what Nokia plans to do with the funds.

Was Stephen Elop a trojan horse?

“Nevertheless, the motivation of Stephen Elop will now come under intense scrutiny. Elop came from Microsoft and decided very quickly that Windows was the only hope for Nokia’s smartphone unit, which was still selling more than 24 M units per quarter in early 2011. After he eliminated all alternative operating system options, he has now decided to sell Nokia’s smartphone unit at a notably low price… to Microsoft, the company he will now rejoin.” Alekstra analyst Tero Kuittinen wrote in a column for Forbes.

“Actually, it was the biggest surprise that Microsoft had such a big role in today’s press conference by Palmer and Elop. And actually this reflects a fact that did Nokia lost its eye for the game again in this situation, when the outgoing CEO was brought still on to press conference. It certainly aroused many kinda feelings in Finns and Nokia workers. […] In fact, I saw it in the way that Nokia’s press conference was left background because of this and it was more of Microsoft’s than Nokia’s press conference.”, Seppälä told to Yle TV (interview in Finnish). He added that if he had been Elop he would have left out of the conference rather than being present carving the open wound with a knife.