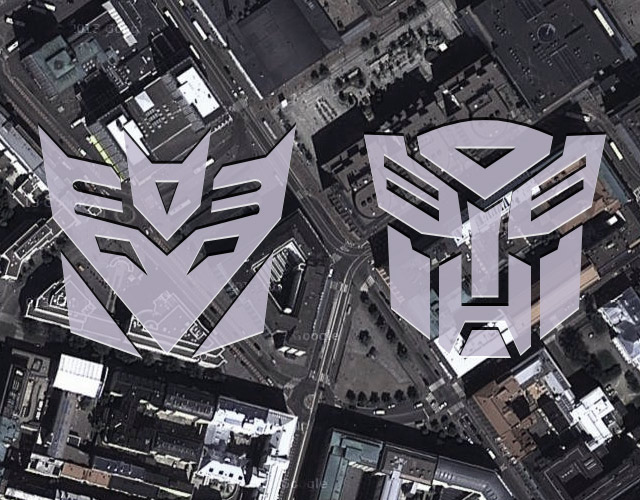 First the online magazine Uusi Suomi reported on a mysterious Transformers Descepticon symbol that was found milled on a railroad track at the intersection of Urho Kekkosen katu and Fredrikinkatu in Helsinki, Finland. The news story spread and someone tipped the magazine of another Transformers symbol in Helsinki at the intersection of Aleksanterinkatu and Mikonkatu.

Uusi Suomi called to Helsinki City Transport (HKL) and asked if they knew where the first found marking has came to the track. Foreman Jari Hartikainen said that the marking is known there and it’s been done by repair engineer Ville Varis who programs the machines.

Ville Varis denied when Uusi Suomi asked him directly: “So you did not grind Decepticon logo on the rail grid?”.

– I didn’t. It was probably put there elsewhere. Summer regards from Germany. I am aware of the drawing. It could also be a student prank. No-one asked to put it there.

HKL makes the tram tracks themselves but also orders rails from abroad. The intersections, where the icons are, were renewed in 2010 and 2011. A German subcontractor was used for the tracks.

Both of these markings are a professional quality job which, according to Hartikainen, hints to the fact that they are made ​​with professional equipment. Night time pranksters can be ruled out.

See the photos of Decepticon logo and Autobot logo on the Uusi Suomi website.