Honey Badger tweets its daily activities in the Johannesburg Zoo 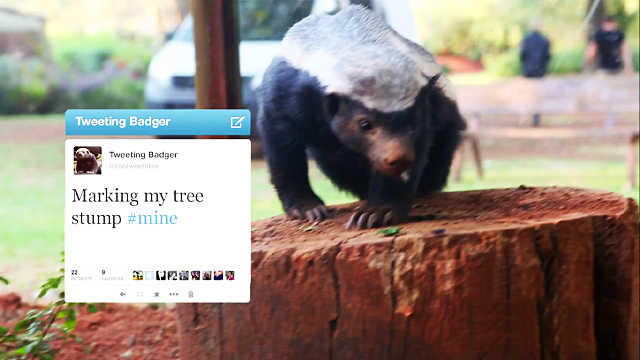 Bee honey favoring honey badger named BG tweets all day long. Sometimes he says he can smell the elephants to his territory, sometimes it’s about the porcupine living the next door.

Yes, you read that right. The Johannesburg Zoo has chosen their mascot, honey badger BG as the spokesanimal and has given him the necessary tools to participate in daily activities in social media.

The purpose of Johannesburg Zoo’s media campaign was to get people excited about the zoo animals as well as keep zoo news and causes top-of-mind.

Technically, this was accomplished by adding wireless infrared motion sensors to six zones in BG’s enclosure. When BG is moving around in the enclosure, the custom built system picks up his location automatically and tweets one of the hundreds of pre-written tweets in real time, all related to its whereabouts. The front zone tweets about people, rear and side zones tweets about neighboring animals and elevated platform tweets news, food bowl sends food-related tweets and the night room triggers thoughts and dream tweets.

The campaign was also quite successful and inexpensive as it only costed less than $1000, at the same time reaching more than 80% of South Africa’s population and more than 800 million people around the world.

Here’s a video of him: